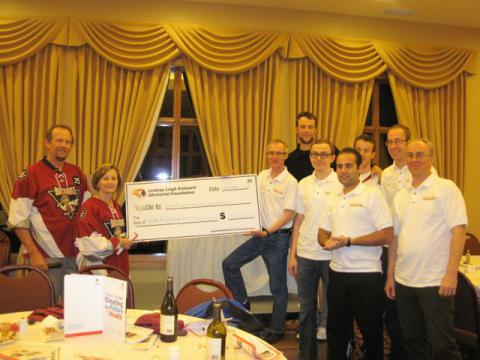 At the end of the Tournament of Aces, Kelly and Dianne Kimmett (left) present a $100,000 cheque to the LINDSAY Virtual Human team. On the right, from left to right: Dr. Christian Jacob, Taylor Kimmett, Timothy Davison, Afshin Esmaeili, Reid Kimmett, Scott Steil, and Carey Gingras.

The LINDSAY Virtual Human team received a cheque of $100,000 from the Lindsay Leigh Kimmet foundation. This money was collected as part of the 2011 Tournament of Aces.

Our LINDSAY team and the Department of Undergraduate Medical Education at the University of Calgary want to express our sincere “THANK YOU!” to everybody who contributed to the success of this event and to all the donors, who made this fabulous contribution possible.

We will continue to help make Dr. Lindsay Kimmett’s passion live on forever.

See more information on the Tournament of Aces here.