Please visit our LINDSAY Video Channel on YouTube for updates on our latest work.

You will see highlights of our current and former projects, such as

The Canadian Science Writers’ Association has recognized our Giant Walkthrough Brain projects as a valuable contribution to the communication of science. Here is the original post from the CSWA awards site.

The Giant Walk Through Brain by Trevor Day, Jay Ingram and Christian Jacob. 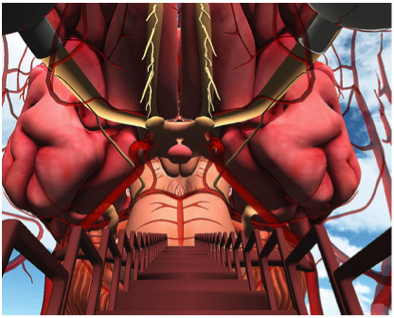 In 1972, neuroscientist Joseph Bogen suggested building a giant 60-story high science museum of the human brain. This giant walkthrough brain would educate and engage students and the public by taking them on guided tours inside, making it possible to visualize anatomical relationships among structures surrounding them. Although this architectural project remains an intriguing idea, the cost makes it unlikely an actual walk through brain will ever be built. However, modern computer technology and advances in computational human anatomy models provide another avenue for exploring a three-dimensional virtual human brain. Our team has developed “The Giant Walk through the Brain”, an innovative, engaging, narrative-driven public science communication performance which takes a live audience on a larger-than-life virtual tour of the human brain. “The Giant Walk Through Brain” is a live theatrical performance, including engaging, story-driven narration, dramatic 3-D computer animations and original live music.

Dr. Trevor Day is a neurobiologist and Associate Professor at Mount Royal University in Calgary, Alberta. He is music director and leader of the five-piece band “The Free Radicals”. They have written original music to accompany the narration and guided 3-D tour of the brain during the live performance. Dr. Christian Jacob is a Professor and director of the University of Calgary’s LINDSAY Virtual Human Project and the leader of the animation team. They have developed custom-made, scientifically accurate 3-D models and animations in the form of interactive fly-throughs to support the scientific and narrative content of the performance. Science broadcaster Jay Ingram wrote the narration and acts as tour guide for The Giant Walk Through Brain performance. He is a member of the Order of Canada with 30 years of broadcasting experience with CBC Radio and Discovery Channel, author of 13 books and co-founder of Calgary’s Art, Science and Engineering festival Beakerhead.

See our other posts about The Giant Walkthrough Brain project:

This summer, we are exploring how to use immersive visualization techniques to enhance the experience of flying or walking through our virtual body models.

Here are a few impressions of our first steps in the iCentre CAVE. For now, we have reimplemented our Giant Walkthrough Brain project and a model of a Eukaryotic cell.

Contributors to these projects are:

We also greatly acknowledge all the help we received from Stephen Cartwright, who so diligently manages the CAVE facility. 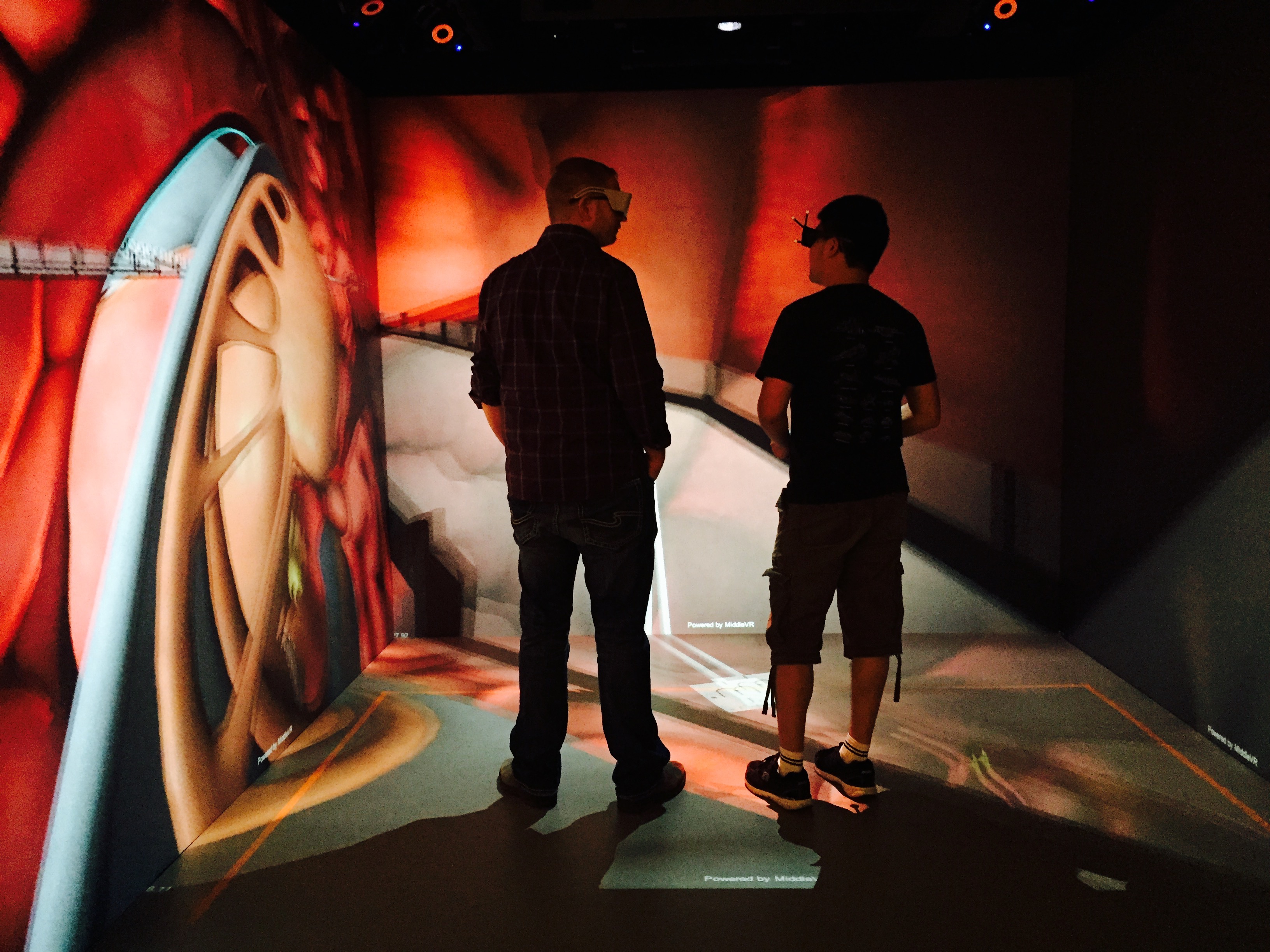 Exploring the Giant Walkthrough Brain in the CAVE visualization environment. In the picture: Stephen Cartwright and Douglas Yuen 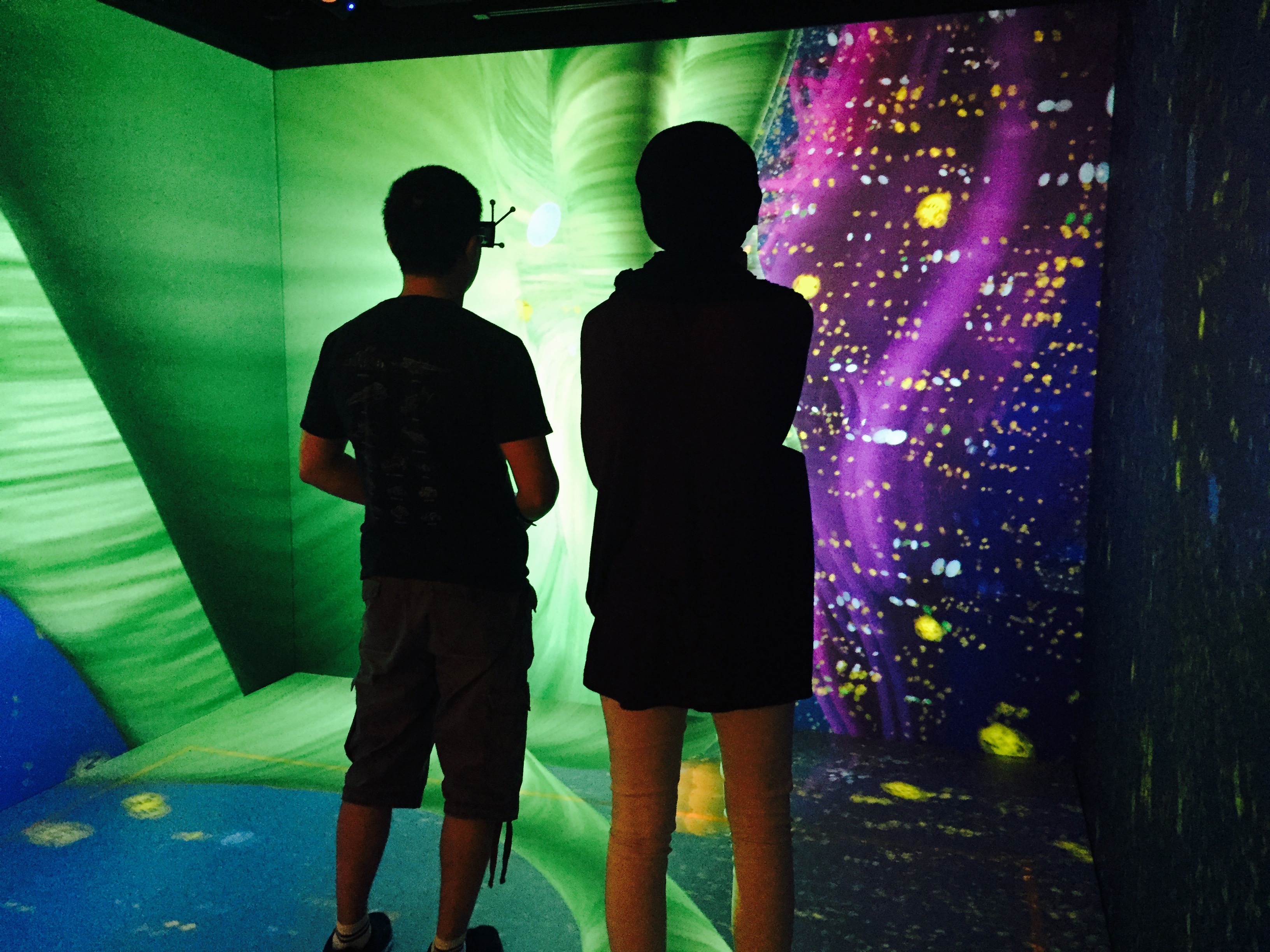 Navigating through a Eukaryotic cell model created by Douglas Yuen (on the left, with Areesha Saalman)

For the third time, the LINDSAY team has been nominated for the ASTech award.

We are looking forward to seeing you at ACCELERATE: ASTech 2.0 on Friday, 6 November 2015 at TELUS Spark.